Henry Diltz’ photographs have been published in numerous magazines and newspapers and can be seen on countless record covers, for example on the debut album of the same name by Crosby, Stills & Nash or on “Morrison Hotel” by the Doors. Henry Diltz was the official photographer of the Woodstock Festival in 1969, which featured this photograph of the lighting designer and master of ceremonies Chip Monck.

Exclusive at the Lightpower Collection, this very limited Fine Art Print is available with the signature of Henry Diltz and Chip Monck himself!

The Lightpower Collection is also offering at best conditions different natural wood frames that can be delivered with museum quality glass. 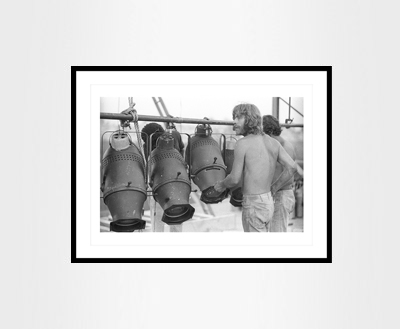